I’m always one of the first to advocate for making a first-in-series book free. Permafree series-starters are what have kept my book sales chugging along. And when I’m lucky enough to score a BookBub Featured Deal on one of my three free Scottish historical romances, the sales of the two following books in each series always pay for the deal and net me a tidy profit.

Similarly, discounting the backlist is great for catapulting sales of new releases. When I was preparing to release Book #3 in my California Legends series, I planned to run a price promotion on Book #1, Native Gold. Since this series is in a more obscure genre — Native American/Western historical romance — I decided to try something different. If I wanted to experiment with launch pricing on any of my series, this would be the one! Rather than discounting Book #1 from $4.99 to free, I planned to drop the price to $0.99. I didn’t expect huge sales anyway, so what did I have to lose? Here’s how I ran my price promotion on Book #1, which successfully drove sales of my new release!

1. Submitted Book #1 for a Featured Deal

I hoped to get a feature on Book #1 that would coincide as closely as possible with the release of Book #3 on November 29th, so I submitted the deal about three weeks ahead of time.

I applied for a deal on all platforms — Kindle, iBooks, NOOK, Kobo, and Google Play — a few weeks before launch, mentioning my release plan in the notes section. Because Native American culture is interesting to other countries, I included all available foreign markets.

2. Lined up other ads

Once I received the happy news that I’d scored a December 7th worldwide Featured Deal, I quickly applied for other promotions to closely follow that date in the hopes of slowing the drop-off in sales and extending the BookBub “halo effect.” I’ve never gotten particularly good results from ads or banners on websites, so I opted strictly for email blast–style promotions with a good ROI history. These included Bargain Booksy, Choosy Bookworm, Free Kindle Books and Tips, Friday Freebies, Fussy Librarian, Robin Reads, and The eReader Café. I was able to book all but two of them, which required a longer lead time.

Here’s one Friday Freebie & 99-Cent Specials promotion, where authors can cross-promote in other authors’ newsletters for free — Native Gold was featured as a $0.99 promotion in Lauren Royal’s newsletter. 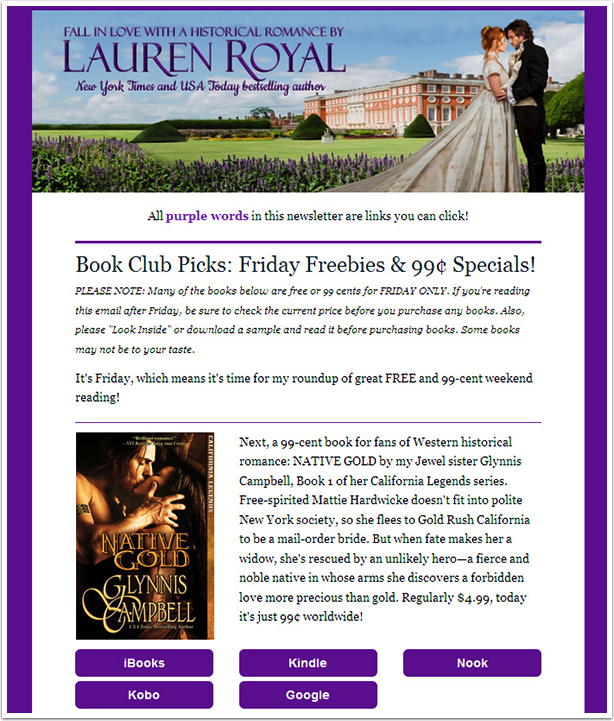 I also contacted all the vendors (Amazon, Nook, Kobo, iBooks, and Google Play) to let them know I had an upcoming BookBub Featured Deal so they could plan possible promotion around it.

Because I was releasing a new series book, I had already updated the buy links in the back matter of my previous books to lead to the new release and provided an excerpt from Book 3 in the back of Book 2. These buy links, customized for each retailer, are absolutely critical in maximizing the potential for all BookBub Featured Deals. 4. Emailed my subscribers about the discount

I’m a big fan of reader outreach, and I love crafting newsletters. I send my subscribers a newsletter every week. Through daily Facebook posts, personal giveaways, multi-author giveaways, and a website pop-up that offers my three permafree books to new subscribers, I’ve increased my newsletter audience to close to 20,000.

For example, each month I run a giveaway to entice people to sign up for my newsletter. In another life, I was traditionally published, so I have a garage crammed with remaindered books. Every month, I give away at least four of what I lovingly call “legacy autographed paperbacks” using Rafflecopter. I promote this giveaway with daily fun and interactive posts on Facebook. Participants must subscribe to and open their weekly winner newsletter to find out if they’ve won!

(By the way, I often include “Follow me on BookBub” as one of the ways entrants can get extra chances to win!) This brief newsletter also contains information about my new releases and special sales. On the day of my BookBub Featured Deal, the subject line for this email blast was “Pssst…Secret Deal!”

5. Buzzed about the promotion on social media

As far as promoting on the day of the Featured Deal, it’s hard to compete with BookBub’s own reach and effectiveness. Instead, I focused on watching the bestseller charts and generated excitement by sharing screen caps of impressive results to Facebook and Twitter. So how did my BookBub Featured Deal go?

On the day of the deal, I sold over 100 times my average daily sales for Book #1, the featured book!

Sales on Book #3, the new release, were 20 times higher than the average of launch week.

Not only that, but as I’d hoped, the drop-off for all three books was very gradual. In fact, after almost two months, Book #2 is now earning double what it did before the Featured Deal, which means readers are clicking through from Book #1. I anticipate sales of Book #3 will also get a boost in a month or two when readers finish Book #2 and click through to Book #3.

What have I learned from this?

Click to tweet: How I Sold 100x More of My Book Series – http://bit.ly/2m4In1k by @GlynnisCampbell #amwriting #pubtip

Click to tweet: Want to boost sales of your book series? See how author @GlynnisCampbell sold 100x of hers! Great lessons here. http://bit.ly/2m4In1k

Glynnis Campbell is a USA Today bestselling author of swashbuckling action-adventure romance. You can follow her on Twitter at @GlynnisCampbell.